Charles Dickens wrote A Tale of Two Cities in 1858. A story based in London and Paris.

Last week was our 39th ISBE conference. Our first on mainland Europe, in Paris to be precise – the best of times. It was also my last as an ISBE Board member, my first being London. It was also the worst of times in that this would be the last before the UK triggers Article 50 to formally start the – hard or soft (scrambled anyone?) – exit from our friends and colleagues across the European Union.

Such was the interest generated, that I ran out of time to wrap up the discussion and seeing that I was the official timekeeper (Rob, you knew I couldn’t multitask) I promised to blog immediately after the conference finished.

So, for the hundred-plus colleagues in the audience and for those unable to attend, here is my last hurrah as your immediate Past President.

I felt that the topics, although occasionally overlapping, fell broadly under three main headings.

Migration: a subject that drew the first question from the floor, “how have we allowed a form of ‘us and them’ culture to spread so quickly in both communities and the workplace?”

The panel questioned the wisdom of the message the UK is sending out to the world when it turns its back on the plight of the migrant. We were informed of the 000s of migrants being moved from the Jungle to Camp Stalingrad while we debated the topic. In the days before Conference, almost 200 children arrived in the UK, including 60 girls under the Dubs amendment, which is designed to protect vulnerable child refugees across Europe. But 38 councils out of 156 in England had so far refused to take part in resettling those who have arrived.

The panel was unanimous that there was little doubt parents who arrive in the UK do so for a safer and better way of life. In 2011, 7.5 million people living in England and Wales (13% of the total population) were born outside the UK. Amongst the 56 million residents in England and Wales, 86% were White, 8% were Asian / Asian British and 3% were Black / African / Caribbean / Black British. Should society decide it is unwilling to help such people integrate, it will increase the problems of migrant parents in ensuring that each new generation has the best start in life, from both a cultural and health perspective.

The panel was also quick to point out that the UK has benefited greatly when it comes to attracting international students, as temporary migrants.  China sends almost 90,000 students a year here, while from India we receive around 18,500, Malaysia 17,000, Hong Kong 16,000 and Singapore 7,000. The quality of our universities are recognised as some of the best in the world and our courses are delivered in English. What is ignored is that all of these international students come to the UK to learn to speak English, get themselves a UK Degree and then return home. They have little interest or appetite in staying or ‘taking’ British jobs.

So, although in 2015 net migration totalled 336,000, of those 169,000 were students, who we referred to above as temporary migrants. Take them out of the equation and ta-da, net migration at 167,000 looks very different to the picture painted by the Brexiters. Given the current hiatus, the panel did not expect Commonwealth countries such as Canada and Australia to shun an opportunity to welcome such model and temporary residents. It could well be argued that the UK is heading for a period of isolation, both in terms of collaboration and compassion.

What cannot be doubted is that ‘borders’ (actual and perceived) and their impact on prosperity looks to be a very timely theme for next year’s conference in Belfast. Indeed, as I write this blog, the All Ireland Civic Dialogue on Brexit is convening in Dublin to evaluate the potential impact on both North and South.

Skills Retention: If, as the panel suggest, the UK is heading for a period of isolation, what might be the impact on keeping and/or attracting talent?

Didier had much fun with a quip about British fog and French frogs, because only last week Paris began an advertising campaign aimed at poaching business from London after the Brexit vote raised questions about the future dominance of Europe’s top financial capital. Billboards showing a green frog wearing a tie sporting the colors of the French flag and the slogan “Tired of the fog? Try the Frogs! Choose Paris La Defense” appeared at Heathrow and Eurostar, showcasing the French capital’s business district. 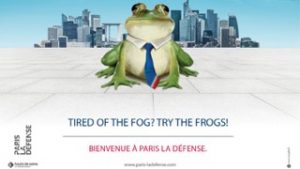 While Ken thought that it was feasible that city firms would look to move certain back-office facilities inside the EU, London remained a highly desirable place to live, a city that had adapted to the 24/7 lifestyle, expected by HNWI. Didier agreed that much would have to be done about the French Tax System in order to affect movement in the 000s.

Conor meanwhile pointed out that there were plenty of EU financial institutions currently resident in London that would have to move, like it or not. In fact, the European Banking Authority with 159 university-educated staff was already being offered a new home by Dublin. Watch this space.

Lynn mentioned that in 2013-14 University tuition fees totalled £13.7bn. The fact that overseas students pay fees far in excess of home students means that international students contribute more than a third of that total. While the vast majority of these students return home as graduates, if they don’t come in the first place we lose both skills and revenues.

Competitive Advantage: We expect a bumpier economic climate in the short term but can, and will, small businesses lead the recovery?

Mark Carney, Governor of the Bank of England, commented that we have a resilient UK financial system and the ‘real economy’ will adjust, possibly before he departs these shores in 2018/2019/2020 (delete where applicable): “Private businesses and SMEs are at the heart of the real economy and they are nothing if not resilient, flexible and adaptable. I am confident that they are well equipped to weather the changes.” Despite such warm words, it is not yet clear what the country’s path to Brexit will actually mean.

For the SME market itself, figures just released as part of the Zurich SME Risk Index would seem to point to an increasingly resilient sector, weathering these larger macroeconomic changes. Anne Griffiths, head of SME proposition at Zurich, says “Businesses are growing at twice the rate of those shrinking in the UK […] the wider picture is one of success, prosperity, and most importantly, optimism”.

Since Brexit, Sterling has fallen dramatically, leading to a three-year low against the Euro following Theresa May’s announcement that Article 50 would be triggered in March, 2017 (subject now, of course, to Parliament’s debating the issue following the High Court ruling last week). Thanks to the referendum result, the Pound has fallen around 18% against the US$, to levels not seen since 1985. On 20 October the Pound was worth US$1.22.

It is inconceivable that the fall in the Pound is not good for exporters, regardless of their size, but it makes foreign holidays more expensive for British tourists and will lead to increased import costs for manufacturers. The panel felt that it was too early to say what would happen to the two million-plus people working in the UK who were citizens of another EU country.  Many of them will work in small firms but their status post-Brexit remains unclear. No doubt much will rely on the sort of trade deals the UK government can make with the EU.

The panelists were in general agreement that small firms don’t care too much about Brexit, as so few of them export, or rely on supplies from overseas. While this may be true in many sectors, it is not necessarily true in all. Ali Capper, chair of the National Farmers’ Union (NFU) horticulture and potatoes board was asked this month why British people do not want to pick apples. “It’s not about pay,” she said. “A good picker may be earning £8, £9, £15 an hour. “The reason British people don’t do this work is that they are seasonal jobs in rural locations that are hard to get to. You work in all weathers, often outside. We live in a first-world developed economy with a society that has an aspiration to have jobs that are inside, in town that are permanent, year-round and allow them to have a mortgage, have a rental contract”.

But Brexit has led the UK Government to offer support to one of the most deprived areas in the country after Carlos Ghosn, Nissan’s chief executive, said he could scrap a potential new investment in the UK’s biggest car plant in Sunderland if the Government refuses to pledge compensation for any tariffs that may be imposed after Brexit. Obviously, Nissan is not a small firm; however, outside of the EU who is to say that other deprived areas might not be helped? For example, there was a promise (probably not a guarantee) of returning the fishing grounds, the fleets and the jobs that went with them. Coastal communities, many who voted to leave the EU (some of which also voted UKIP in their 0000s) – are places that may well benefit from Brexit. Fifty years ago, Britain’s fishing industry employed around 50,000 fishermen. Today there are around 12,100 fishermen who are active in the UK. Over 1,900 are part-time.

As with any blog, there’s a balance between how much to put in and what to leave out. I hope to have captured a flavour of the discussion, while spicing things up with some additional facts and figures provided by audience members, after the event. I also promised to pull together some possible research ideas worth exploring over the coming months, given our discussions in Paris. So, known to the ISBE Executive as a forecaster with as much foresight as Michael Fish here they are, in no particular order: –

P.S. Unlike, Dickens’ protagonist from the book, Sydney Carton, I cannot claim that, “it is a far, far better thing that I do, than I have ever done,” but being on the ISBE Board has been a tremendous experience. You might wish to think about trying it yourself, one day!