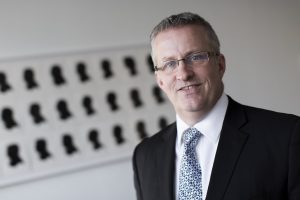 Professor Nixon joined Ulster University in July 2015 from the University of Tasmania where he was Deputy Vice-Chancellor (Research) – responsible for driving the research agenda, through both existing and newly formed research institutes. He has extensive industry and commercial experience, particularly in collaborations with global high tech firms. He was responsible for the research portfolio at Tasmania, its two existing research institutes and the formation of two further institutes.

He was previously Science Foundation Ireland Research Professor in Distributed Systems at University College Dublin (UCD), where he was Vice Principal (Deputy Dean) of the Faculty of Engineering, Mathematics and Physical Sciences. From 2007 – 2010 he was Academic Director of INTEL’s Independent Living and Digital Health, leading a team of 150 clinicians, researchers and engineers.

While at UCD, Professor Nixon led the establishment the UCD Complex and Adaptive Systems Institute (CASL), focused on the inter-disciplinary research at the intersection of mathematics, computation and scientific discovery, bringing together over 250 researchers to lead national programmes in Bioinformatics, Computational Finance and Network Science.

Professor Nixon has significant industrial and commercial experience. He has had active collaborations with INTEL, Microsoft Research, HP, Oracle and IBM. From 2007-2009 he was Academic Director of the INTEL Technology for Independent Living Centre – INTEL’s largest University-based research centre with direct funding of €30 million. He has been a founder of three start-ups, including of NDRC Ltd, an IP development company supported by a €25 million investment by the Irish government. Professor Nixon was an IBM faculty fellow in Autonomics with the Dublin Centre for Advanced Studies.

Professor Nixon (47) is originally from Liverpool. He holds a B.Sc. (Hons) in Computer Science, an M.A. and a Ph.D. in Computer Engineering. In addition to his time at UCD he has held academic positions at the University of Strathclyde, Trinity College Dublin and at Manchester Metropolitan University.

Ulster University is at a most exciting time in its development as it seeks to consolidate and enhance its international reputation for research and teaching, through a focus on targeted research excellence and an enhanced student experience, as well underpinning its role in enhancing the communities in which it is located, and its contribution to the local economy.