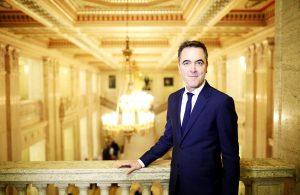 James Nesbitt is an actor, presenter and comedian from Northern Ireland. In 2010 he accepted the ceremonial position of Chancellor of Ulster University. Born in Ballymena, County Antrim, Nesbitt grew up in the nearby village of Broughshane, before moving to Coleraine, County Derry. At the Riverside Theatre he made his acting debut at 13 as the Artful Dodger in Oliver and got his equity card at 16 in Pinocchio.  However, he wanted to become a teacher like his father, so he began a degree in French at the Ulster University. He dropped out after a year, opting for acting. He transferred to the Central School of Speech and Drama part of the University of London. After graduating he spent seven years performing in plays that varied from the musical Up on the Roof (1987, 1989) to the political drama Paddywack (1994). His feature film debut was playing Fintan O’Donnell in Hear My Song (1991).

Nesbitt got his breakthrough in television in the romantic comedy-drama Cold Feet (1998–2003), winning numerous awards. Cold Feet has recently made a triumphant comeback. His first significant film role was in Waking Ned (1998). In Lucky Break (2001) he made his debut as a film lead and in 2002 he played politician Ivan Cooper in the television film Bloody Sunday,  a turning point in his career.  He won a British Independent Film Award and was nominated for the British Academy Television Award for Best Actor.

Nesbitt starred in Murphy’s Law (2001–2007), twice gaining  Best Actor nominations at the Irish Film & Television Awards (IFTA). In 2007 he starred in Steven Moffat‘s Jekyll, earning a Golden Globe Award nomination; starred alongside Liam Neeson in Five Minutes of Heaven (2009); was one of the lead actors in the miniseries Occupation (2009); starred in the movies Outcast (2010) and The Way (2010); portrayed Bofur in Peter Jackson’s three-part film adaptation of The Hobbit (2012-2014). More recent roles include the TV dramas The Missing, Babylon and Lucky Man.

He has two daughters from his marriage to Sonia Forbes-Adam and supports numerous charities: a patron of Wave (supports those traumatised by the Troubles); since 2005, a UNICEF UK ambassador, working with HIV and AIDS sufferers, and former child soldiers in Africa: and an honorary patron of Youth Lyric, one of Ireland’s largest theatre schools, since 2007.

James was voted Northern Ireland’s National Treasure in an event organised to celebrate the 20th anniversary of the National Lottery in 2014.  He is well known for his support for Coleraine FC and Manchester United FC

In recent attendances at the University he has spoken of the importance of the continued investment in young people through higher education and launched INCORE’s digital archiving project, designed to preserve personal accounts of the NI conflict for future generations. In his role as Chancellor he has addressed the Northern Ireland Chamber of Commerce, the Londonderry and Strabane Chamber of Commerce and was the keynote speaker at a lunch to mark the 40th anniversary of Ulster University Business School in 2015, as well as many other conferences.

James, of course, is an entrepreneur himself as owner of G&H Film and Television Services, based in Holywood. The company provides vehicles to the film industry across Northern Ireland. The trucks have become a common sight around the north in recent years when productions such as The Fall and Game of Thrones are in town. The company provides the full gambit of vehicles required on film sets from dining cars to wardrobe trucks as well as toilet blocks and even a rain machine. The business also has a range of motors for use on screen such as marked police cars and army vehicles.